You might have seen the images of this young owl, taken with my trailcam.   This owlet is a creature of habit.  As soon as it becomes dark, at this time of year around 5.15pm, he arrives to see whether his day-old chick has magically appeared on the apple tree stump.  If it has, he takes it off elsewhere to eat it but he always returns shortly afterwards to check whether he missed something or whether anything else has appeared.  This makes it relatively simple for me to get a few images with a decent lens.  He took me completely by surprise a few nights ago.  I was looking out of the small hole in my hide, waiting for him to come, when he decided to explore the hole.  Of course, they fly silently so the first I knew was when he was hovering right in front of my face and, presumably, wondering who I was!  Anyhow, he beat a hasty retreat and landed on the lawn before flying up to the apple tree.  He is a beautiful bird and I’ve enjoyed having him in the garden.  I don’t know how long he’ll stay as his parents may want to return to start their nesting in the new year and I doubt they’ll countenance his presence then.

Maybe I’ll have another next year. 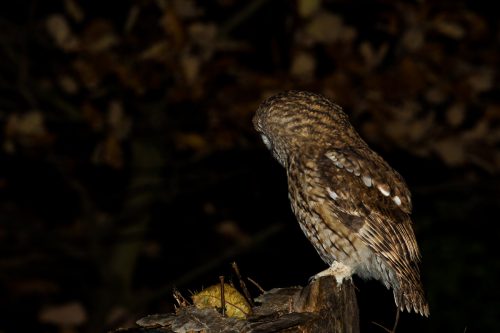