If you have followed my blog, you will know all about our tawny owls, but here’s a recap.  Two years ago,  the male owl in these images (flying and sitting on the tree stump) fledged from this nest box in our garden.  Since then, I have fed him with a day old chick almost every evening.  Now, at two years old, he has a mate (sitting on the edge of the box) and they are nesting in the same box, slung underneath one of our ancient apple trees.  Now, obviously, they aren’t ‘our’ owls but we do have a connection which is more solid than we have with any other bird in the garden.  Our relationship is special.  When I talk about the difficulties of wildlife photography, I often tell people that wild animals, although often creatures of habit, don’t keep appointments.  They will choose if and when they arrive at a particular spot and will stay only as long as they feel like it, all of which presents the wildlife photographer with demands on his/her patience, and, sometimes, having to manage frustration and disappointment.  However, this owl knows the hand that feeds him and we now have an arrangement each evening which he keeps without fail.  A couple of nights ago, he turned up early.  It was just 8pm and still daylight.  I suspect he knew he was early and that supper had not yet been delivered because he flew into a tree nearer the house where he could see me.  I was in the conservatory and he looked directly at me as if to say, ‘Ok, I’m early but we have chicks to feed’.

Today, 24th April, the male flew into the nest on at least two occasions to deliver prey during daylight.  This isn’t unusual, even for a predominantly nocturnal owl.  We saw him at 12.30pm and again at 7pm.   He now regularly arrives before dark to collect the chick and delivers it straight into the box to the waiting female.  Five minutes or so later, she emerges from the box and flies off to join him.  Now, we can hear the squeaky calls of the youngster(s).

I’ve taken these photographs over the past few evenings from my hide in the garden.  I know when he is about to arrive because she starts to call and then when he is in the vicinity, the nesting blackbirds begin their strident alarm call and harassment.  That gives me just a couple of seconds to get one shot as he flies into the frame.  If I’m a tiny bit slow, his head is down the hole looking for the chick as you can see in two of the shots.

I confess that watching them has become a bit of an obsession but it’s so nice to see their comings and goings, particularly during this time when we are pretty much locked down.  Follow with a bit more detail on my blog. 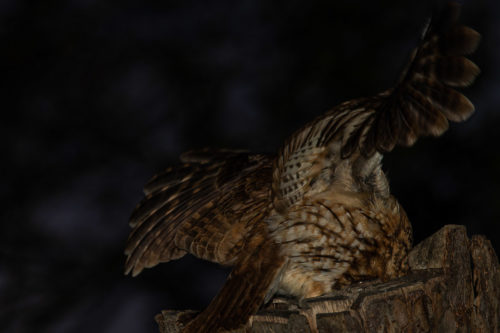